Hyderabad! an International standards city has witnessed a huge rainfall this Tuesday, 14th of October 2020. Everything in the city and with the GHMC was looking good until the city witnessed the huge rainfall.

Many buildings collapsed, roads turned to rivers, colonies filled with water, cars were floating, and most importantly many people died.

The reason behind the failure of the GHMC in facing heavy rains is nothing new but let us check out them once again.

Improper sewerage capacity has been a problem for Hyderabad city mainly in the rainy season every year.

Though the Hyderabad Metro Politan Water Supply & Sewerage Board has taken the charges to develop and maintain the sewerage line for Hyderabad, it hasn’t shown its impact on a high situation like this.

Failure in monitoring the Full Tank Level (FTL) is also the major cause of the current disaster.

Conserving the lakes in any region should be the primary agenda for the government but the authorities failed and let many people build residential buildings just beside the lakes.

Hyderabad Metropolitan Development Authority (HMDA) has clearly passed some rules stating “No building activity shall be carried out within 50 meters from the boundary line of the river within Municipal Corporation/ Municipality/ Nagara Panchayat/ HMDA. Here, the boundary line of the river shall be fixed by the irrigation department and revenue department as per the G.O. Ms. No. 7, MA&UD (M1) department., dated 05.01.2016”

No building activity shall be carried out within 30 meters from the boundary line of Lakes/ Tanks/ Kuntas as per the same G.O. mentioned above. But coming to reality, the current situation around the lakes is nowhere near to issued rules.

Durgam Cheruvu, the new weekend spot for the Hyderabad public (Due to Cable bridge) was initially built-in the 17th century with 150 acres of land and it was also called a Secret lake. How many of you have observed that the Full Tank Level of that lake is being occupied? In the picture, we can clearly see that it is being surrounded by the colonies and many prestigious private projects. And the government acts like it is not seen.

Durgam Cheruvu is not only a lake that is being surrounded by private ventures, but there are also many in the city. 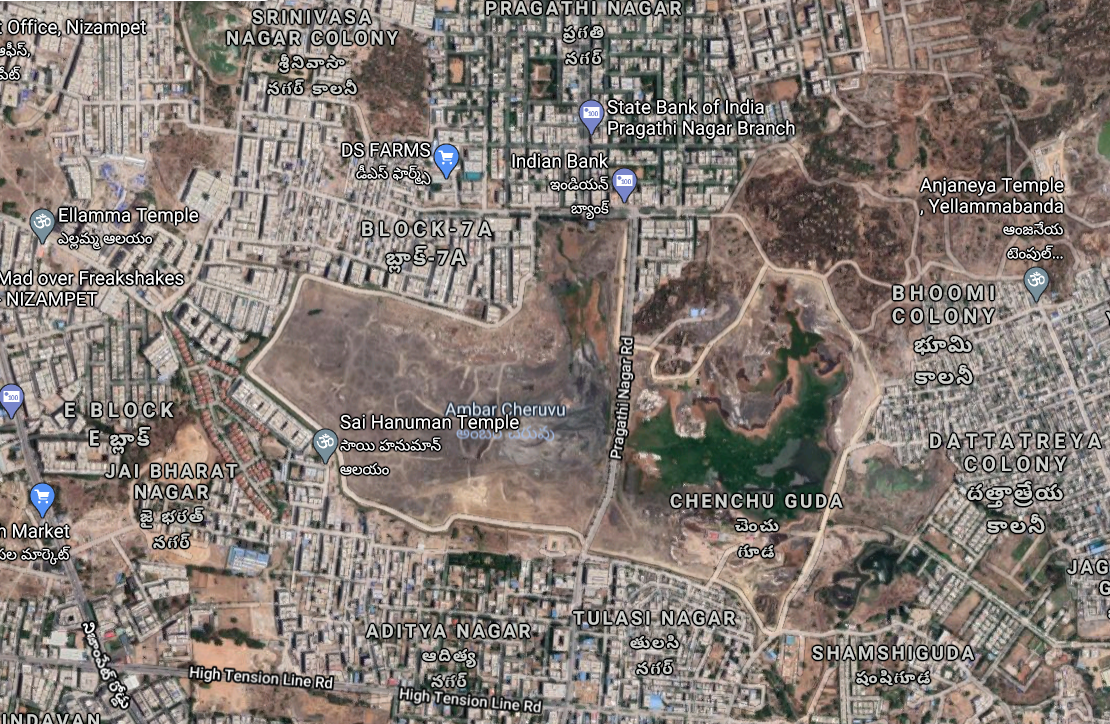 Permitting the housing ventures near to lakes by breaking G.O. has costed many lives today in Hyderabad. Passing G.O’s and not monitoring them at least in the city limits is not a joke and it should be considered as a serious problem at least now.

Apart from the Full Tank Level monitoring, GHMC has failed to safeguard the needy today and many people rescued themselves only. No GHMC team has been seen during the heavy rainfall to rescue the needy and we have seen the results at the cost of lives and damaging properties.

Coming to the public, though we know the capabilities of our authorities, we are also still a reason for this disaster. Throwing plastic wastes on roads has been also the main reason for the water coming into the colonies, as the wastes have blocked all the sewerage lines in the city.

No Result
View All Result